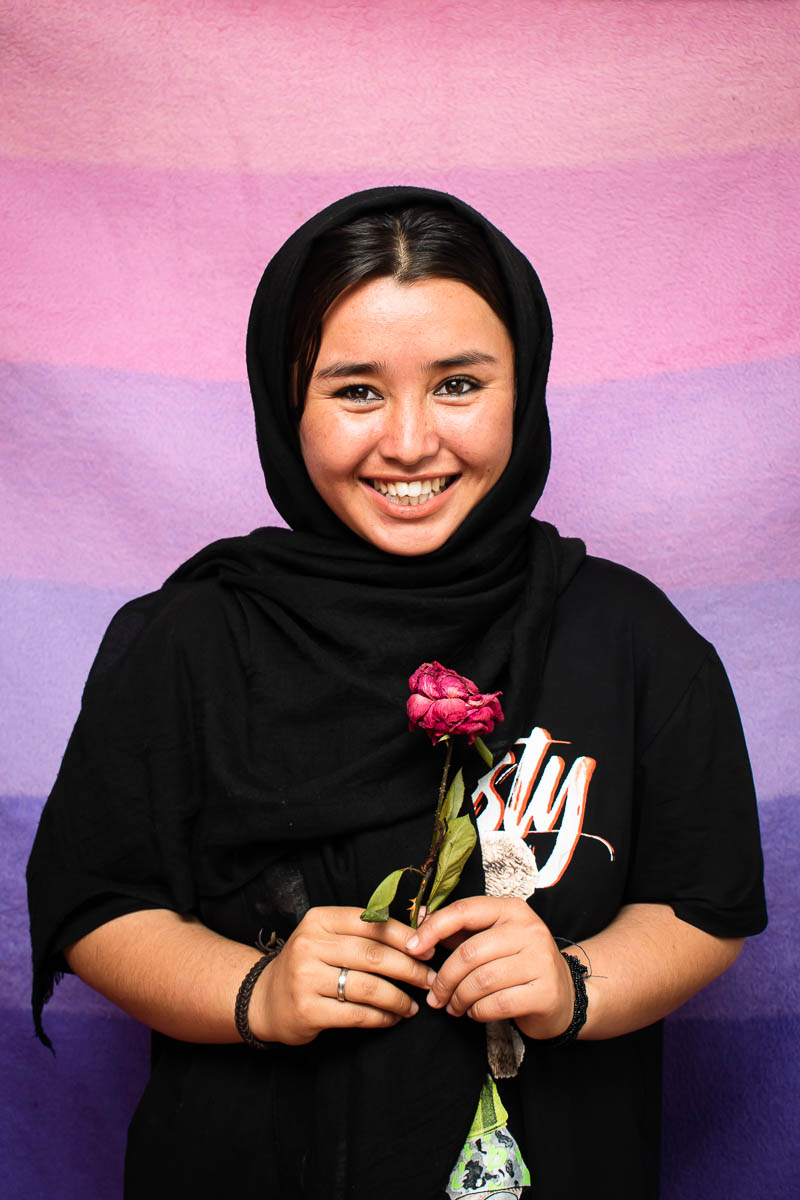 “I wanted to study the field of mapping internal parts of buildings but they didn’t allow me,” says Fatemeh Sadeqi (20). She was banned from studying this subject in Iran, where she and her family were living, because she is Afghan. Persecuted due to their nationality, her family fled Iran and made their way overland to Turkey and then by boat to Greece, where they now live in a refugee camp. Along the way, they lost all their belongings to thieves and nearly drowned in the Mediterranean: “I was thinking I’m about to die. Not only myself, my whole family was about to die in front of my eyes.” Fatemeh says she thinks about the journey often “because I am sad most of the time.” But, she adds, “I don’t have a hopeless feeling.” Nevertheless, she worries about lagging behind her peers: “My first dream is to get out of here and reach the place that I want. My second wish is to continue my education because I am literally behind in my studies. It means I am about to lose it.”

Can you please introduce yourself?
I am Fatema Sadeqi from Afghanistan and I am 20 years old.

In what type of house do you live?
In the camp inside a room.

Can you explain the situation there and what kind of place it is?
The situation in our camp, it is a good camp compared to other camps that I have been in before. It is a good camp but they are short in paying attention to our work, I mean immigration work.

Can you explain about your house and how is it?
There are buildings that they have built and give one or two rooms to one family or if there are families with fewer people, they put them in one room to live together.

Who do you live with?
With my family.

How do you spend your time here? Do you work?
Ahhhh it has been some time since I went to work with my mother and father. Before that, … I do not go to class here because of the Corona that has closed off the classes, I don’t go to school either. It means I spend my time working.

What will make you happy?
When our case is solved sooner and get out of this indecisiveness.

For example, what has been hard for you? Can you explain it to us?
The life conditions and for example, living in a tent, in an environment that was very crowded, 20 thousand populations and ahhhhhh and …

Can you explain how living here makes you feel?
It has given me this feeling that I can be stronger, cope with my problems, solve my problems, then build myself, make myself stronger.

What kind of feeling is being far from your family members and your home created in you?
My family is with me. It means I am with my family. I am not far from them.

Would you ever think of being able to overcome this situation? How could you stand against them?
Ahhh I didn’t think I would be able to cope with it. How did I overcome it … We solve them with each other’s help. It means my father, my mother and me.

Do you think that you’ve gained the strength to fight against these challenges or you already had it?
I have gained it. I would have been weaker before but I am stronger today than before. I can cope with my problems.

How has Corona affected you in terms of your daily life, your morale and your emotions?
It has pulled me one step back. It made me far from what I wanted to do and where I wanted to be.

Why did you leave your country? For example, did anything special happen that you would want to talk about? To explain it to us?
I don’t know. My parents said they had a fighting case in Afghanistan that is why they left Afghanistan.

How about Iran?
In Iran, there was a problem that is why we left Iran. I cannot talk about it.

What was your feeling at that time?
I was feeling lonely. It was a bad feeling to leave our home and life there and become displaced. But well, to solve that problem, we sacrificed ourselves and our lives to come here and make something. It has been good until now.

How was your trip to Europe? Was there any specific difficult experience that you would like to talk about?
It was very hard. During our trip in Iran and from Iran to Turkey (and) from Turkey to Greece, many problems happened to us. Thieves attacked us on the Iranian border, they took everything that we had, from money to jewelry and these (sort of) things. They took everything with themselves. Then they released us and we came to Turkey. It took one day for the human traffickers to find us and take us with them. During the way from Turkey to Greece, ahhh we had a problem. We almost drowned in the sea once, the other time they wanted to deport us and then we took seven or eight games towards Greece and we arrived here at our last game which was the eighth game.

How did you almost drown?
When we were about 200 to 300 meters’ distance from the seashore, there was a rock in the middle of the sea that had come up, that our captain did not see that and our boat hit the rock and was torn apart. We were mostly women and children which is why the possibility of drowning was very high. But the single individuals carried children with that boat towards the beach, it was also the men who took us back to the shore. We survived without lifeguard rescuers coming.

What was your feeling at that time?
It was a bad feeling. I was thinking I’m about to die. Not only myself, my whole family was about to die in front of my eyes.

How do you feel when you think about them?
I feel like we could overcome everything and we will be able to overcome the problems that we have and struggle with now. I don’t have a hopeless feeling.

Has the situation that you have today affected you? How?
Yes. It has had a good effect, not a bad one. But the fact that I lag behind with my normal life is a bit hard for me.

How has it affected you?
It had a positive impact. It means, I could live far more than what I am but, well, those who are the same age as me are one step ahead of me. For example, in education, in society, but I am like a prisoner here who lives in a camp. It means I naturally lag behind but well, it was good. The situation … It means in the condition that I was in, the situation that I had in Iran where I would only go to school and come back and sleep, it has been much better. It helped me stay strong.

Have you ever thought of being able to overcome this situation?
Yes. When we started our journey from Iran, all of us said that we can but we wouldn’t have thought it would be this hard.

How could you pass all these problems? Did you have any strategy to pass this hard time? Generally, where would you find your strengths and where could you get supported?
My strengths are that none of my parents are educated, I am their older child and I am the one who can help them. That is why, for my family and for my parents, so they don’t have hard times, I would give hope to myself and would say that we can, and for them not to lose their hope I would try to stay hopeful myself. It has been good so far and I have made progress. We are far more successful than many other people.

What were your dreams before those incidents happened and before you decided to escape from your house? Before you wanted to come to Europe?
I wanted to study the field of mapping internal parts of buildings but they didn’t allow me. It means I could not study this major in Iran. The region where we used to live- studying this major was banned for the Afghans. But it was my dream that I gave up on and came here.

What are your dreams and wishes now?
My first dream is to get out of here and reach the place that I want. My second wish is to continue my education because I am literally behind in my studies. It means I am about to lose it.