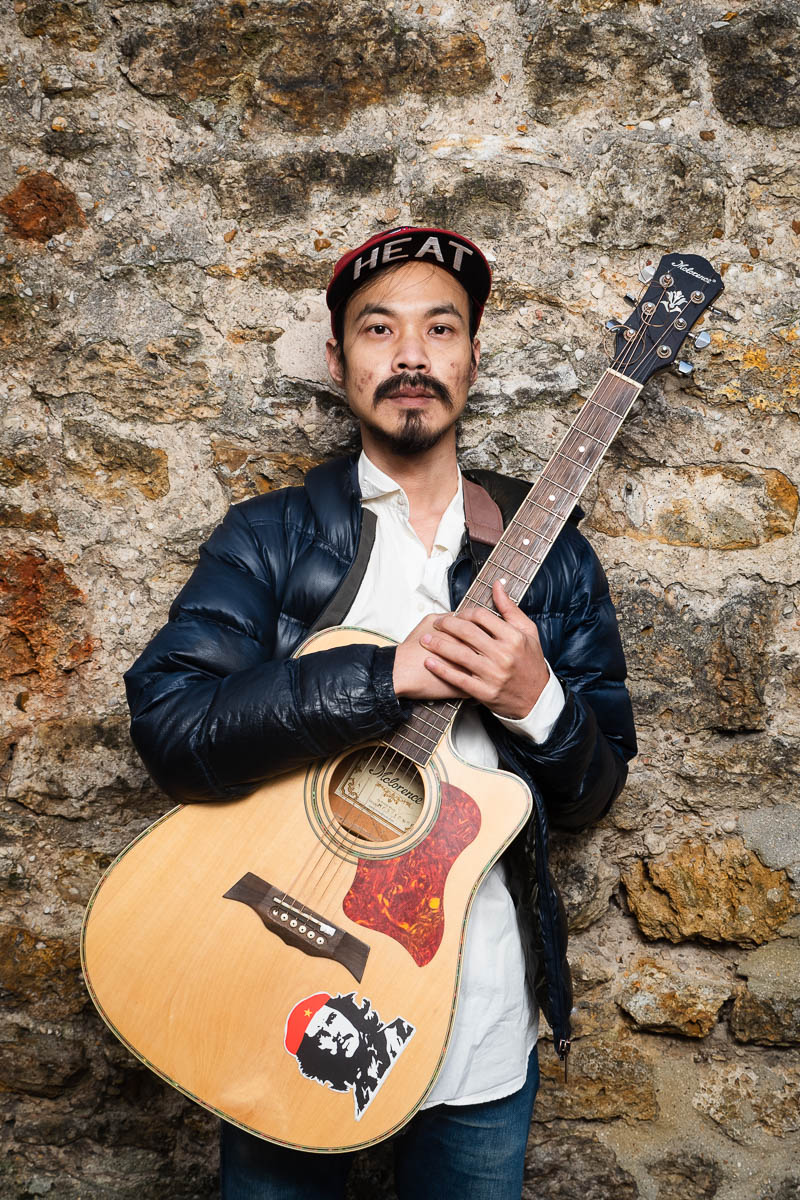 “Now we are human,” says Jom Faiyen (pseud, 34) a political refugee from Thailand. His dream used to be to build an aquarium. That changed after the military crackdown in 2010. He formed a political band: “We met in the mob,” he says. “We active with the song against the monarchy.” Four years later, they fled to Laos. “They said we are insulting the king,” he explains, adding that this could lead to up to fifty years in jail. They stayed underground and continued to share songs on YouTube, until they had to flee danger again: “The Thaï monarchy assassinated our friend… We scared, we very scared… We ask French embassy that help us to leave out from Laos.” Now living in Paris, he feels free. “We happy that we have the freedom to speak… Now we are human. When I live in Thailand, I didn’t think that me is a human.” In the younger generation of Thais though “we saw the hope,” he says. And “a chance to revolution.” He continues to share music and his dream is to “tell the world what’s happened in Thailand.”

Can you introduce yourself?
Okay, my name is Jom. I’m… 34 years old, and vocalist of Faiyen band and I am a political refugee from Thailand. After the military coup in 2014. Yeah, I leave from… from my country to go to Laos, and live in Laos for five year and going to Paris.

And can you tell us here, do you live in an apartment, in a house? Are you happy with your living conditions?
Yeah, I… Now I am happy that I live in the apartment of refugee in Paris, it’s OK that we didn’t pay more expensive to… to live. Living is very cheap.

And do you work here now?
Now, I cannot work because I… I just beginning to learn French and if you cannot… speak or listen in French we cannot work, work in many place. But we… We are Youtubers… some, sometimes we, we have receive income from, from social media.

Videos and everything.
Yeah.

Okay. What do you do every day? Do you make YouTube videos or what else do you do?
Yes.

You play music?
We, we, we make video and… Sometimes we will go to… mini concerts, play music in Place de la République.

OK, and what what brings you joy, what makes you happy today?
With… I think we happy that we have the freedom to speak… something that… if, if we live in Thailand we cannot, cannot have the right to speak… I think we… We are human. Now, now we are human. When I live in Thailand, I, I didn’t think that me is a human because I cannot say, I cannot speak the truth, that… Some truth that you… When you say, you can going to the jail because… the monarchy it didn’t want you to speak anything. But now we… I, I think I’m human. Yeah.

Nice.
Before I think I am a slave, or…

Well, freedom… But what else? Is there like some, some things like… Is there something you do here that makes you happy?
I think… It’s maybe… The thing that makes me happy…

Maybe meet, or see some friends, I don’t know. From Thailand or elsewhere…
Yeah, yeah… I have my new friend here… Many nationalities, Taiwan, Hong Kong or many country that I never know them before, I have many friends here.

OK, and what instrument do you play?
I just begin practice the guitar.

How do you feel when you play the guitar?
Oh I think it’s good but… But I cannot do, it’s bad because… Before this, our guitarist in our band was jailed in Thailand and I just beginning to play because we no have guitarist.

Can you tell us about your band and how it started, how you met together?
My… My band was beginning in… 2010. That, from react to the Bangkok crack down in 2010. We tried to sing a song that fighting with the military government that save people that died in the crackdown, its the beginning of that.

Did you know each other already or how did it happen that you made the band?
No, I just… it, it just… I don’t know. I don’t know him before. I don’t know anyone before. But we met in the mob. Yeah.

And so you were all like, politically you wanted to do something?
Yes. Yes.

And tell me what happened after, like the years after, until you had to leave to Laos?
We active with the song to… Against the monarchy, to parody to the monarchy for four… For four years in… in Thailand. But when the military coup, they… Someone asked to go to jail, to go to a military court, that, that… They said we are insulting the king – insulting the monarchy is very… High, high tension. And in jail it’s three to fifty years for one case. It’s called lèse-majesté law in Thailand.

And so how was it when you made these songs and how did you feel? Were you scared or were you… I don’t know, what was the reaction of people around you? Were you afraid that you would be in jail?
Oh, no, I’m not afraid because many, many song to speak that for the past, the friend that die in, in fighting and and we just speak, we just say, we just sing for anyone, not to forget him, forget them.

But you you were not afraid that the police, the military would catch you?
No, no. Before the military coup, I didn’t scare or anything because I… When, when we write a song, we saw the cases, the article, the lèse-majesté cases before. And we write the song that avoiding into jail. But when the military coup was in the power, they used the military court that didn’t normally of justice system. They used just to, just with us and we just going out from Thailand.

OK, so that’s when you decided to go to Laos.
Yes.

And in Laos, again you continued?
Yes. We continue against the Thai monarchy with YouTube channel. And… Four years passed, the Thaï monarchy assassinated our friend that does make the studio underground in Laos against them. My friend was assassinated for it. Eight person.

Eight?
Eight person of Thaï refugees in Laos was assassinated.

Eight Thaï refugees in Laos were assassinated? Wow, ok. And how did you feel when you left Thailand to Laos, yourself personally?
I think if someday the Thaï uprising was beginning, we were just going back. It’s easy from Laos, it is just only one river crossing. Yeah. I… We want to going back to fight with, with our people.

So you were you were still thinking of going back.
Yes. I was thinking going that if Thaï uprising was happening.

And then after in Laos, for five years right?
Yes, five years..

How did you feel? Did you integrate a bit into society or were you still seen as a refugee?
Just stay underground. Because the Laos government can’t say we will live here, we live in this country. And we just use the underground station with YouTube in our place. Not going out, not going to public.

Ok.
When… When we were losing our friend with… Assassinated from Thaï government, we scared, we very scared. That the reason we ask request to France, French embassy that help us to leave out from Laos.

And they accepted your request, and so how did you feel on the plane coming to France?
It’s interesting because I never go out… Go out from my country. It’s the first time I’m going to Europe or foreign country. It’s first time of me. And I don’t know how to… how I can live. With the snow, it’s first time I… I see the snow in real life. It’a new life, I think it’s a new life.

So were you like excited? How did you feel?
Excited. Excited because I think I’m just beginning the new environment, the new language, the new friend, the new social… Everything is exciting.

And can you tell me a little bit about you, like your first months here. How was life when you arrived here?
I think is… I think I am free to speak anything that didn’t… There for they assassinate, going to be same like my friend in Laos. I think I have freedom. I can speak more, to… And against the monarchy, I can speak more.

So you felt free?
Yeah I felt free.

And you believe in music, right?
Yes.

As a form of activism.
Yes.

And you compose songs?
Yes. Is composed many songs and vocal, and sing myself.

Can you tell us, like, how you compose a song? What’s the… What’s the process behind it?  How do you have the idea?
The idea, I think that… Tell the younger generation that… To know the feeling of fighting, just to know the feeling of fight, they have chance to die… In the real life you have the chance to die any time you’re fighting with many big power. But you just understand it and… And choose that you want to leave the fighting or you want to go into fighting with us.

Thank you. Thank you Jom. Just to ask you, what were your dreams before 2010 before you joined Faiyen?
Ah, my dreams… Before 2010 I am dreaming to have aquarium. I like aquarium, I like freshwater animal. I, I think someday I just building my aquarium in in my country. But is cannot…

So today, your dream would be to give this message?

Thanks, Jom. I didn’t ask you maybe just… When did you start playing music? How did you learn it?
I just… I not serious with playing music before, because I just only seriously with singing, with use of vocals or compose. But, but when my guitarist of our band catch in jail, I just just beginning practicing because we did not have musician now.

But you sung, you were singing?
Yes.

Ok, thank you. Thank you very much. So thanks, Jom, I just had a last question. You said listening to your music is legal in Thailand, right?
Yes.

So tell me a bit like what is… What is exactly the… The reasoning behind it so, people can listen to it but it’s a hidden message. It’s like parody?
Yes.

Your music.
Yes my music is yes…

Because it’s art?
Yes, because parody is art, is funny.

Great. Thanks. Thanks Jom.