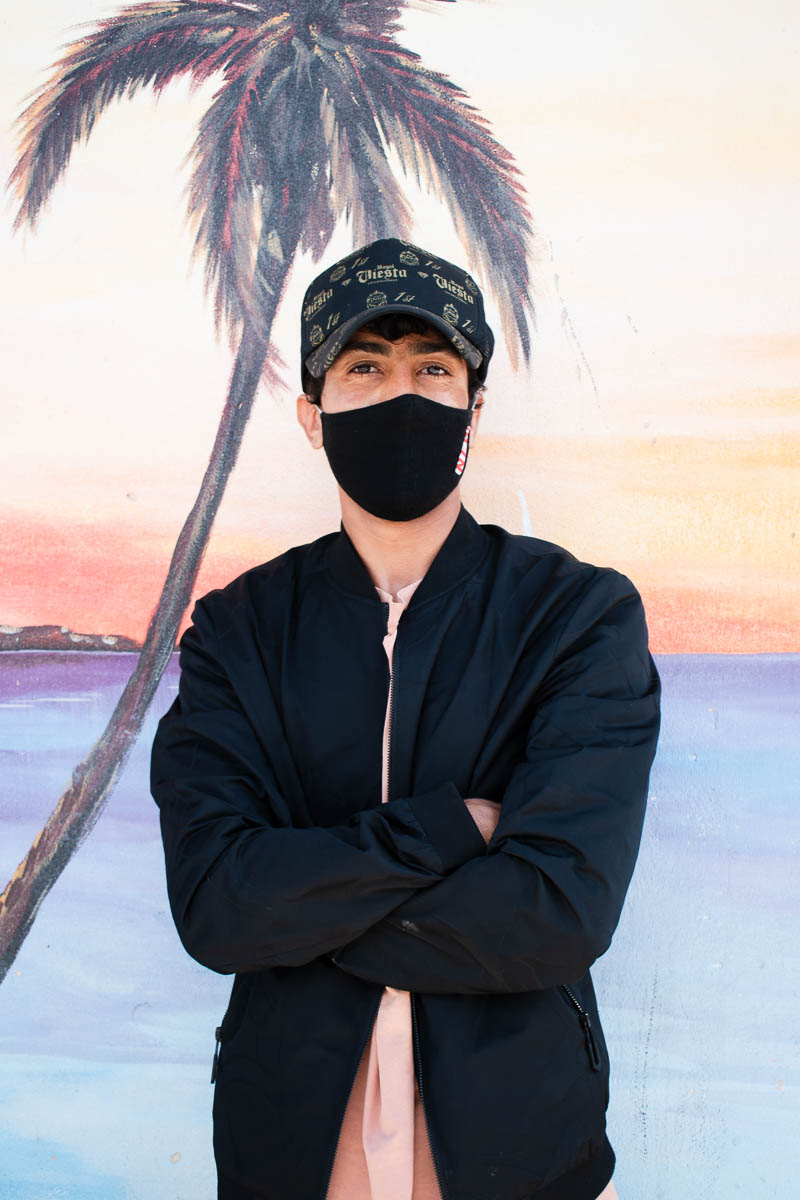 “I wanted to become a computer specialist and study artificial intelligence,” says Milad Ebrahimi (21), an asylum seeker from Afghanistan, of his dreams before coming to Europe. When he was two, his family fled to Iran to escape the war. He says that racist treatment of Afghans there later led him to flee again. During the journey he felt “fear to the point of death.” At one point he nearly drowned. Apart from some film and photography classes in the camp, where he lives in Greece, he’s unable to continue his education. “All those things were just an illusion of Europe.” He worries for his family too. “Not only me but everyone has been mentally affected, especially children and women living in the camp.” He says, “Everyone has faced some problems and I think the only way to fight it is to be with your friends and those who protect you and kind of support you.” The future, he says, “is kind of getting darker and darker every day, more unclear and more vague. I don’t know what will happen.”

Can you please introduce yourself?
I am Milad Ebrahim, 21 years old, from Afghanistan.

In what type of house do you live?
In Moria camp number 2.

Can you explain the situation there?
Unfortunately, it does not have a good situation. The old Moria camp caught fire and the government forced us to come to the new camp. We live in tents in the new camp.

Who do you live with?
I am alone.

How do you spend your time here? Do you work?
I do not have anything special to do. The only thing that I often do during the day is going to the filming and photography classes in one of these institutes, NGOs.

What makes you happy?
What makes me happy … When my work has a positive impact on my own people. I mean the immigrants, everyone.

How has your life been from the time you entered Europe? What has been good and what has been bad?
Ummm … there was no good thing at the beginning until, … Until I got introduced to the filming and photography classes and the like. It has been good after that. It used to be all miseries before that.

Can you explain about it? How was it?
Ummm … the first days, we were kind of confused because every immigrant has some type of expectations from Europe. They come to Europe because of some expectations. They have some goals and some dreams. But when they come to Moria, the old one that caught fire, all of those things get destroyed. I had the same feeling.

Can you tell me how you felt at that time?
That time, I was feeling that the whole world has gotten destroyed over my head and all my hopes are ruined.

For example, when you came here, were you feeling hopeless?
Uh-hem, it was like I was supposed to live in a tent in this camp till the end of my life. And to not be able to continue my education, have a new life, nothing else. All of those things were just an illusion of Europe. That is it.

How has being far from your family and home made you feel?
I have become kind of more worried about my family because I am far from them and do not know about their status. The short phone calls that we have is only a simple way of communication. I cannot understand the reality and in what kind of situation they are. This is what makes me worried.

Would you ever imagine being able to overcome such a situation? How did you overcome these problems?
Ummm … everyone has faced some problems and I think the only way to fight it is to be with your friends and those who protect you and kind of support you.

Why did you leave your country? Can you explain what happened?
I left my own country, Afghanistan, when I was two years old and my family fled to Iran because of whatever reason it was, like their safety and war. I have lived the rest of my life in Iran. And I left Iran because its government and even its people had racist behavior with the Afghans and the Afghan nationality. So, I was forced to leave it.

What was your feeling at that time?
That time, I was kind of feeling that the government and even the people have tied my hands and legs and I am not able to follow my goals and reach the big dreams that I want. But it was as if the government was putting a concrete wall in front of me each day, each month, and each year. And there was no way ahead.

How was your trip towards Europe? Did you have any special experience that you would like to talk about?
Ummm … the trip towards Europe was definitely hard. The only thing that it had in abundance was fear. Fear to the point of death.

Wasn’t there anything hard that you would like to talk about? The road that you took or the sea? Something that has been very hard for you?
The road that we took on foot was hard, it was cold and difficult. There were hours that we could not even move one step forward, faint, excessive tiredness, but the hardest problem was to cross the sea. The first time that we tried to cross over we drowned and we kind of felt death for some seconds.

What would you feel at that time?
I was feeling that … The feeling that I had at that time when we were drowning, I felt that everything has finished and it is the end of the line. And … all of those plans that I have made for my life, the things that I was thinking about and the person I was planning to become, all of them were ruined just because of an effort to reach them. It was as if I died at that moment and became alive again.

Has the situation that you have faced today affected you? How?
It has definitely affected me. Not only me but everyone has been mentally affected, especially children and women living in the camp. Although men can somewhat find a solution for the difficulties that they face or hold them inside, women and children are more vulnerable than the rest of the immigrants and I am one hundred percent sure that all of them are kind of depressed. They have a bad mental condition and these things have a negative impact.

Would you ever imagine being able to overcome this situation?
Ummm … No. I would sometimes feel that I can no longer continue. I would somehow feel that it is the end of the line. Although it is natural that sometimes when the problems attack, people think of committing suicide or I don’t know, total isolation and don’t want to see anyone and you only want to be with yourself and want to pass these days until you die one day. It has come to anyone else’s mind and it has come to my mind as well. Yes.

How could you overcome these problems? How could you find your strength and support to get out of these hard situations?
As I said, I would get my strength and support from the people around me. The people around me were kind of supporting and helping me and were kind of trying to give me a helping hand and do something to make me continue and never give up.

What was your dream before you left your home and escaped?
Before I escaped Iran, my dream was … I had expectations from Europe. I was thinking that when I arrived there, things might not be clear for one year but after one year, I would be able to start my education and reach the things that I wanted. For example, I wanted to become a computer specialist and study artificial intelligence. I was thinking that I would be able to make a great change in the field of electronics and become a big figure and would kind of be proud of myself. But, one year has passed and I am still here and I feel like I have not taken even one step forward.

Now that you are in Europe, what are your dreams for your future?
The future is kind of getting darker and darker every day, more unclear and more vague. I don’t know what will happen.

It means you do not have any special dream to think about?
No, as I said, I don’t think about the future but the moment.