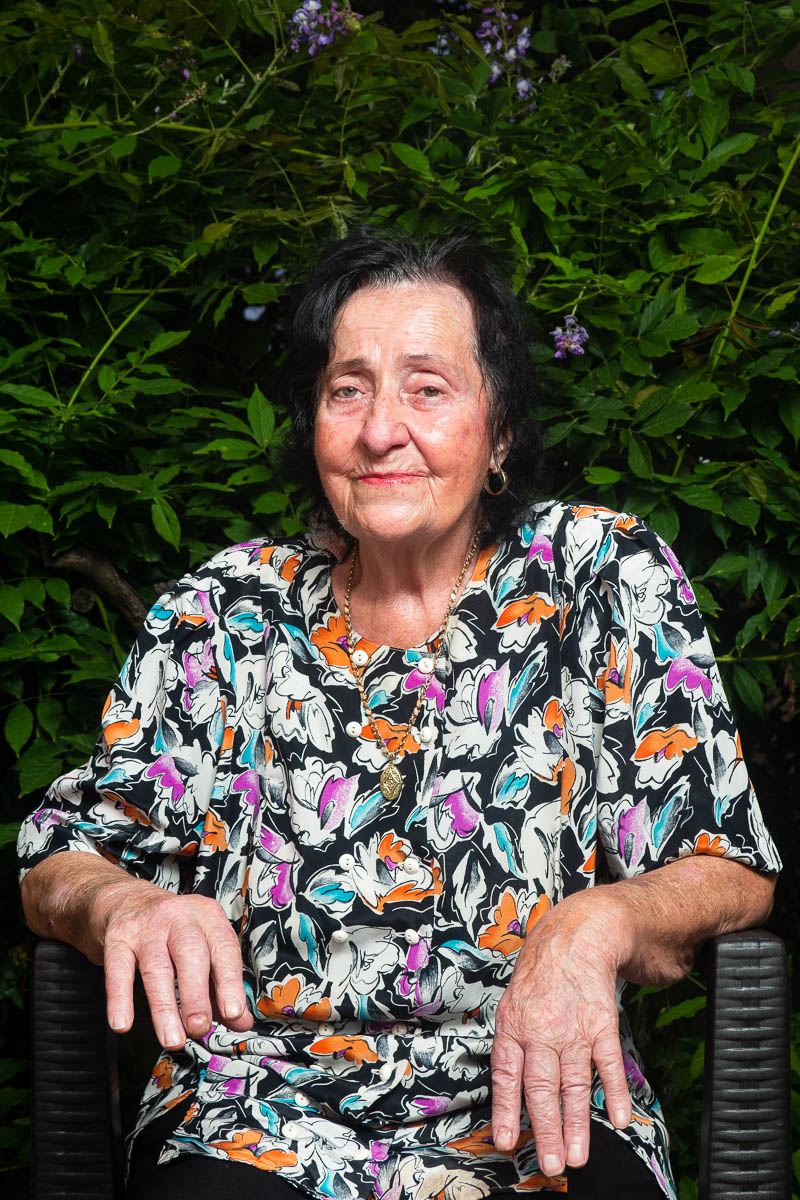 “The dream was for there to be peace. That it is as good as possible,” says Zekija Henic (79), who left her hometown of Ljubija, Bosnia and Herzegovina, in 1994 due to conflict. After two years in Zenica as a refugee, she went to Spain with her children. There, she says, she felt like an orphan: “You are alone, you have nothing; no job, and what can you do?” In 2000 she returned to Ljubija. It was in shambles and ruins. “The kids are in a strange land, my husband is dead, I was left alone like an icicle,” she recalls. “I sat on a log and called to God for help, as I had nothing left.” But Zekija found the strength, hope and will to rebuild her life. She worked, prayed, and told herself to keep going forward: “There is a will and desire in you to go back to your own. And when you are back, there is a strength in you… You suffer and work, and work to complete or rebuild what is yours,” she says. “There is no greater satisfaction than to be back in your own place.”

Alright, we’re giving this a 4th go. Can you tell us where you are living right now?
In my house, which I built. I came back here in 2000; I started working pretty much any job I could find to earn some money, because I am a pensioner.

When did you build this house? Do you want to tell us more about the history of the house, and who you lived with here?
The first one?

This house here, your house…
Before the war?

Before the war; which year was it built in, if you remember?
I remember, of course I remember when I built it with my own hands.

How long did it take you to build the house?
Well, around 2-3 years; my husband and I, because he knew how to do anything and then he and I pretty much built it alone. That’s how we got the house, and then this… Because we have two sons and we were thinking they could build a second one next to us.

What do you most like about Donja Ljubija, here where you live?
I was born here, of course I like it, you know; born and this is where I married. I was with my parents, I also buried them here. I was taking care of them because they were without any income. My mother was suffering from illness for 8 years, at my place. My father died in 1992.

How do you feel here in this house?
Good, because this is my property; there are no issues here, and no one is bothering us. It’s nice here.

What did you decide? You told us that you came back; can you tell us more about the time you left Bosnia as a refugee, and when you decided to come back?
Around two and a half years I spent as a refugee in Zenica; then I went to my kids to Spain… I spent two years there as well.

Can you tell us how you felt being in Spain?
It was nice, but it’s stranger land. And older people really like the places where they originally came from…

So you felt like a stranger there?
Yes, a stranger and that’s it. They would not let me work there, due to age…

And did you work at all in Spain?
No, but it is true that I picked up some Apricots (laughs)

Can you also tell us, before you got to Spain, why did you leave Bosnia? If you can explain to us…
I had to leave Bosnia, I would stay until the end at my house; but they sent buses during the night, last round – and they kicked us out, forced us to go to Zenica and then I spent two years there.

Can you explain the feeling when you had to leave in 1994…
Well, it was horrible; you have nothing, you’re leaving everything behind that you built from one salary…

Could you believe that you are in this situation?
Yes, I did not care who was going to rule. I wanted peace. Nothing else mattered. I wanted to stay where I was; they said we could and in the end they sent seventeen buses and then they kicked us all out. And in Zenica there was famine; there was nothing to buy, everything was closed. So we spent some time there and then my kids looked for me and… I left for Spain after 2 years in Zenica. And then in Spain the same awaited me; I was not used to my kids to feeding me, because I used to help my kids. So it was difficult for me to be taken care of by my kids, while I am unable to work myself. That’s what I did not want, and I wanted to go back. When I came back and saw this for the first time, everything was in ruins.

When did you come back exactly? Which year? In 2000?
Yes, in 2000, I came back here to see the house and I saw that it was gone and I could not go back. The kids were complaining.

How did you feel when you came back and saw that the house…
Like everyone normal would; you are poor, left without anything. The kids are in a strange land, my husband is dead, I was left alone like an icicle.

That was the hardest for you? Without your husband?
Yes, of course. I was sitting on one log, left without parents and husband. When I got here, there was a refugee in my house. He said I won’t leave, this is my house. I said “Well, we will see if this is yours or mine.” I sat on a log and called to God for help, as I had nothing left.

Then you think… your hope, how would I say. Your will, strength where did …
Yes, you got strength and hope and will to rebuild your own and stay there.

Where do you think where you drew that strength from, after war, after two years in Spain and then coming back… how would you explain that strength?
How would I explain the strength? Simply, there is a will and desire in you to go back to your own. And when you are back, there is a strength in you, not even sure where it comes from; you suffer and work, and work to complete or rebuild what is yours.. And I stayed here.

How many years have you stayed here, 20 years since you came back?
Yes.

And where are the kids, still in Spain?
The kids are still in Spain; the older one went through all the encampments as he finished military school in Croatia.

Can you tell us what the feeling is to live so far away from your kid. In the end you came back to your homeplace…?
What it is like? Well, you feel like an orphan. You are alone, you have nothing; no job, and what can you do? You were left without anything, the kids had to stay there. Spain is like Spain.

How do you think about that situation, that war… how would I say it? I do not know how exactly to ask this question.
I was thinking where and how. You don’t have anyone, alone like an icicle.

And where does that strength come from, when you are alone…
You tell yourself, I need to keep going forward.

Have to go forward? You always think to move forward?
Of course. You leaving everything else behind and keep moving forward.

How was your city when you came back? How did it change now?
Just a desert, everything was overgrown and in shambles. Everyone built and cleaned up for themselves. I started working with tourism, to build on something. I did not ask for anything from my children, when they also left, they needed to take care of their families… and to not burden my children, I worked in tourism; I built a room by room and earned for myself. First one then the other; the burden is heavy, I’m a woman. Everything falls on your head, simply. The whole burden is on you. But I got the strength and said I would move forward. Prayed to God for health, as much as possible, so I can… so I built and eventually welcomed my children here.

You are happy that you came back?
Yes! There is no greater satisfaction than to be back in your own place. That’s the satisfaction.

Can you explain a bit more, coming back to your own, and how you felt in Spain. A little more if you want to explain to us…
Well, I do not say anything about Spain…

I mean, that feeling of being a refugee and…
Everyone looks at you like you are an orphan. You have nothing, you came to strange land…

How much did you miss Ljubija (her home town)when you were there?
A lot.

What did you miss the most, from the house and…
Everything. I was born here. I missed everything; over there it is a strange land, and everyone looks at you as they do not know who or what you are. I asked for work and help, but they did not let me. For my kids to feed me, I could not. And Spain was not that well off; they were looking to feed their own families there.

Did you ever think that you would be in this situation after 1991?
What did you say?

If you ever…how do I, this question; after what started in Prijedor in 1991, did you ever think that that situation would ever happen to you?
No. We always believed in our people. And we lived so nicely together, we celebrated together. No one could ever think something like that would happen. But what happened, happened. Thank God it is over; there was pain and hunger, but we lived through it and kept moving forward. Forward and that is it. And we all went back to our own places. There was some prohibiting, but there was no way to prohibit that from happening. Everyone got to their own, got to work; and silently, hungry and thirsty, just to make that one room and then we went forward.

I have one more question; I mean this is the last question…not really a question, but we want the people who we talk with, to tell us what their dream is, current dream is? Like their life dream? And if you can start by saying “My dream is” and that we… what is your dream?
The dream was for there to be peace. That it is as good as possible. I did not care who is who. I was friends with everyone. I did not care who is a Serb, who is that, who is this; I cared what kind of a person it was. And that’s how it happened. We had friends, we did not care what had happened, we only moved forward.