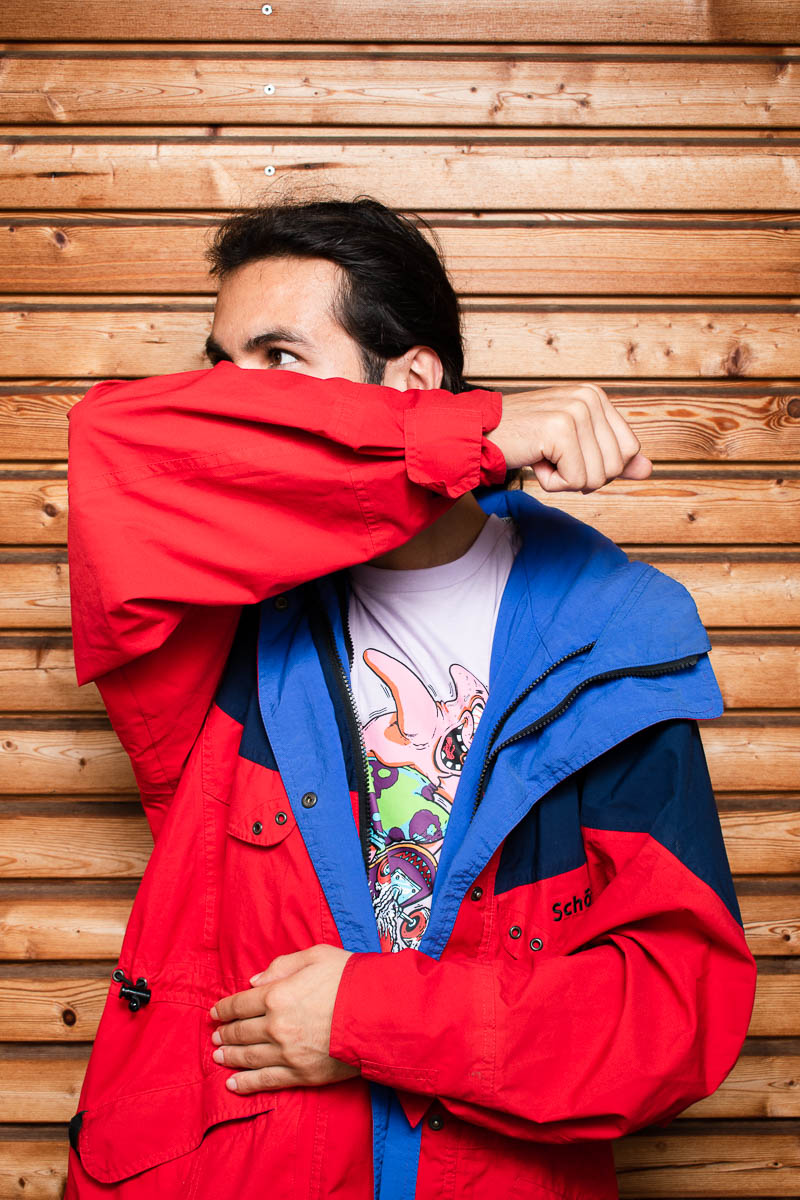 Since childhood, recounts Armin Tahmasbi (pseud, 28), “I wanted to be alone and stand on my feet, not attach myself to others or depend on them, and not need anyone that much in order for them to help me with my work.” Originally from Iran, Armin left for religious reasons. “My dream,” he recalls, “was to run away from where I lived to reach a place that has freedom, not being treated badly, and to be safe.” He is currently in a refugee camp in Germany, where he says that life is “a bit hard and difficult because you don’t have any specific room, nor a specific place, nor is your food on time… For now, we are suspended in the air (everything is uncertain), waking up every day and you’re jobless.” But, through his sense of independence and self-sufficiency, he challenges himself to “get used to hardships.” Today, Armin says, “My dream is to be reborn in the new country that I will go to… I want to continue my path and expand my life and achieve all the things I want.”

Hello dear Armin. How are you?
Merci, thank you.

Are you ready?
Yes.

What type of accommodation do you live in now?
Camp… (Interviewer doesn’t hear properly) …camp.

Can you explain more why it’s more difficult?
For example, at the place we are currently in, it’s been 10 years since people with the same language as us haven’t come here. People of our nation haven’t come here. After 10 years, all the security has become people that speak their own language… all of the security… and since they speak the same language, they can communicate well and we can’t speak what we want. Our rights are trampled on. You can’t say what you want, they won’t understand you. Unless and until you don’t go to them, they won’t give you. But for others, the security who are in charge will themselves bring it for them.

Who do you live here with?
With my roommate… there’s no one. I don’t have a relative here.

How do you spend your time here?
Well, for now, I’ve got a book, a German language book. Sometimes, I practice with that. I don’t even have a mobile to watch… just that. Sometimes I go out, then sometimes I come back and practice more.

Do you also work here?
Work? No.

What are the things that are the cause of your happiness?
Happiness… when a human is jobless in general, as in doesn’t do any work, and if every day is repetitive, it’s not joyful. Humans become happy by working, going out, talking, does something to kill time. Not like always staying in the room and having the same repetitive day.

Ever since you entered Europe, how has your life been?
For now, we are in the process of becoming refugees. It’s a bit hard and difficult because you don’t have any specific room, nor a specific place, nor is your food on time. Till the day we are in a camp, we can’t say if it’s difficult or if it’s good. For example, whenever we have our own life, only then will it become bold and it will expose itself.

What was the benefit of staying here?
Ummm.

What was the benefit of staying in Europe?
I’ve come here recently. I don’t know about the benefits but if God wills, there will be benefits from now on.

What was difficult until now?
Living in this condition, as in joblessness. They didn’t create anything for us, like to go to a class and be occupied, or something educative. For now, we are suspended in the air (everything is uncertain), waking up every day and you’re jobless.

Can you explain how living here has made you feel?
Sorry, could you repeat that?

Can you explain how living here, like in Europe or in the city that you are in, has made you feel?
I feel like I will achieve the thing I want. As in, they will not take my rights. I will try to do all I can and I will achieve it.

What feeling do you get being away from your family members or home?
It was really difficult for the first few days but we have to tolerate it nonetheless. Being away and far has to be tolerated. It’s not like there will be a relative that will always be there with you. You’ll have to one day be away from them.

How has the feeling of not belonging here or discrimination affected you? As in you don’t belong here, for example, we aren’t from here. The fact that you don’t belong here… just as you said about the security that they would discriminate and help the ones that speak their language and only after them, they would help you. What feeling do you get? How has it affected you?
It’s a bad feeling. Yes, that’s right, I agree. I’m neither from this country nor do I speak their language but whatever the case, I have to cope with it.

What feeling do you get when they discriminate against you? Do you become angry?
Yes, I do frequently become angry but I also say why don’t I know the language… at least their language. My work could have also progressed easily because you can’t do your work if you don’t know the language. Or, as I said, if you don’t know their language, you can’t do your work.

What’s their language?
Their language is Arabic… Even when I speak English to them, they won’t help me with my work but it’s a bit difficult and disappointing that it has to be like that.

Did you ever imagine coping with this condition?
Yes, I’ve always been like that. Even from the start, I wasn’t attached to any family member or relative. I had this condition since childhood. I always wanted to be myself. Not to depend on others or be dependent on them.

How were you able to overcome this condition and continue your life?
Umm… I don’t know. I had this feeling since childhood, I’m not sure how I had that feeling but I had it since childhood. I wanted to be alone and stand on my feet, not attach myself to others or depend on them, and not need anyone that much in order for them to help me with my work.

Now, I’m going to ask you some questions regarding your past. Why did you leave the country?
Because of some religious reasons.

Can you describe what happened?
Can I not explain or do I have to?

No, it’s up to you. If you don’t want, I can move on to the next question.
*silence*

What feeling did you have at that time when everything happened?
I felt insecure, in danger, felt unsafe. Every day that I slept at home, I felt like someone is about to come and something would happen. I always felt the danger.

How was the journey to Europe? How did you come to Europe?
On foot.

Did you have any specifically difficult experiences that you can tell us? Regarding your journey.
The difficulty of the journey… when you are alone and you have gathered everything in your life in the hopes of passing through borders but then encounter opportunists, bandits, and police at borders that get in your way. They either send you back or annoy you and take away the things that you have with you, making things and conditions really difficult.

What feeling did you get at that time?
I 100% definitely didn’t have a feeling of hopelessness because I always had the hope of leaving. I was willing to deal with the hardships. Whenever something happened, I used to say, “No problem, I will return back more prepared.”

Do you often think of these incidents that happened?
I do think but I try to get along with it.

When do you think about these?
When… I get free time; I think about the past and think, “Why should this person do this? Why isn’t there anyone to answer them? Or stop them? Or to at least listen to us… in order to stop them.”

Is there anything specific that you think about often?
No.

Has the current condition that you faced had an impact on you?
As in?

As in, the process of becoming a refugee, or things that you left behind to reach the place you are in. Doesn’t this have an impact on you?
No.

Have you ever imagined managing those situations?
Yes, I did. I did think I could manage it.

How were you able to get along and move on from these conditions?
As I said earlier, I challenged myself a lot as a child and have tolerated a lot of hardships. That’s why I got along really well.

Did you have any strategy or mechanism to overcome the difficult days and memories?
No.

What was your dream before the incident that led to you running away from your country? I want you to start your sentence with “My dream was…”
My dream was to run away from where I lived to reach a place that has freedom, not being treated badly, and to be safe. Not to think that at any instant, something bad will happen.

Now concluding the questions. Before leaving your country, what did you describe as your strength?
Never give up, you’re never alone, you can do it.

Have you preserved these?
Yes, I always say these to myself.

What you experienced seemed really difficult. Do you feel that these experiences have led to your improvement in any way or resulted in something positive?
Yes, there have been some positive things. I realized that when a person wants something it won’t become impossible to get. If you say, “I can’t,” then you won’t be able to get it. But if you think positively and become hopeful, it will surely happen.

What are the hopes and dreams you have now for the future? I want you to start your sentence again with “My dream was…”
My dream is to be reborn in the new country that I will go to. I want to continue my path and expand my life and achieve all the things I want. As in, the things that I always hope for… I want to keep increasing them.

We thank you for your answering all the questions. Is there anything you’d like to add so that it helps the European people to understand the life of refugees in Europe?
At the moment, no one can judge or understand anyone. Now, how much ever… the difficulty of the way, the difficulty of the route, how much ever we say… the person who’s listening to this can’t seem to understand us as we do. They can’t place themselves in our place. If we say we had difficulty, they would think, “He just had a difficulty.” But really, the path that we came from really had difficulties along with bandits and police that took everything from us but no one has heard of this or even if it has, they wouldn’t care much about it. No one is stopping them. Really in this path… it’s true that the route was difficult but sometimes the police made the difficulty 10 times harder. One might forget how the route was difficult but no one can forget the things that the police have done.

Do you have anything else to say?
No.

Thank you, I hope you have great success.
Welcome, thank you.