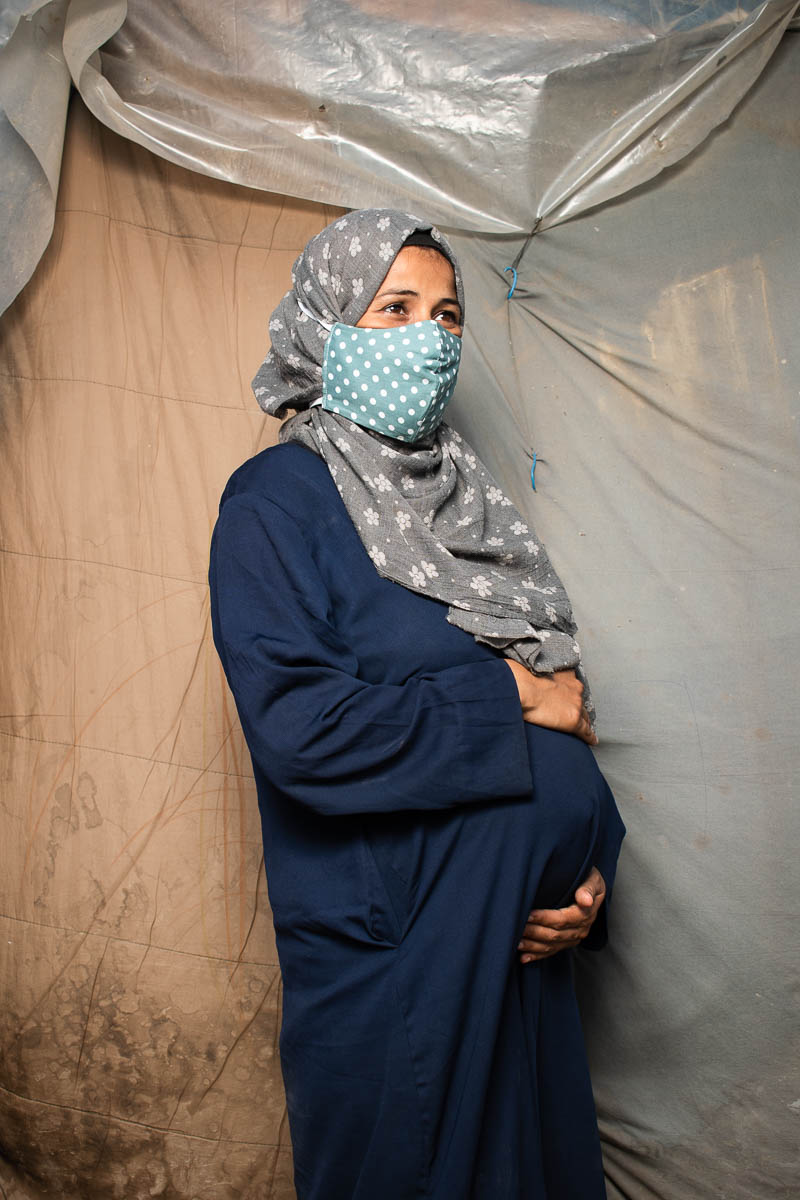 “It was my hope and dream before leaving Syria, my homeland, to have a normal life, far from fear and terror.” Om Majed (pseud, 33) fled Syria to Greece with her family to escape “terror and war.” The journey was harrowing. On the final leg, they spent five hours on a boat. “The sea was rough and the fear was immense,” says Om Majed. They are seeking asylum on the island of Lesvos, where “I live with my husband and my four children in a nylon and wooden tent, in the Moria refugee camp.” They do not feel safe from wild animals nor from other inhabitants of the camp. “My husband and I take turns watching all night – to protect our children,” she says. The family thinks about their “psychological stress due to living in this camp.” She adds, “I do not wish for any mother or child to live the life or experience what we have lived.” Om Majed says her children give her strength and endurance. “When I look at my children, when they are sleeping at night, I hope that the dawn will be better.”

This interview was provided without the questions that were asked by the interviewer.

I live with my husband and my four children in a nylon and wooden tent, in the Moria refugee camp.

I am nine-month pregnant, expecting my newborn. I spend my entire day attending to my children’s needs and protecting them from the dangers of living in the wild, such as the insects.

My six-year-old son was stabbed by another child, and when we went to complain to the Greek authorities, they didn’t do anything at all. They only said they are children and we couldn’t do anything.

There has not been anything new since my arrival to Greece, except rejections and not offering us as Syrians any rights.

They insist that Turkey is a safe country for us, regardless of what we think.

They decide which country is safe for us, even if we disagree.

We think about the rejections we received and the psychological stress due to living in this camp.

My husband and I take turns night-watching all night, to protect our children from the dangers of the wild, or from being subjected to abuse, or robbery.

I miss my mother a lot.

She is the source of my strength and nothing replaces her.

I never would have thought that I would be  able to endure what I suffered here on this island.

The reason and strength behind my endurance are my children. I live for their sake. Quarantining due to the spread of Covid 19 did not affect us, because we have been isolated even before this pandemic, since our arrival to this island.

We have been confined to this camp since the spread of the virus.

We left Syria, my homeland, because of terror and war.

My husband was kidnapped by a gang who wanted to take advantage of his expertise as a car mechanic.

He was locked up at the work location they assigned for him, and was forced to sign bank checks of unknown balance.

We had to flee to Idlib, searching for a safe place.

We were detained by the Nusra Front and held captives with our children  for three days.

We were searching for life even amidst the destruction that plagued our homeland.

My husband tried to open a car-repair garage, but was asked to booby-trap the cars, taking advantage of his mechanical skills.

We did not agree to that because it would hurt a lot of innocent people.

We then decided to escape to Turkey.

We tried to escape during the weekend holidays for 4 weeks, so that they would not know of our attempt to leave the country.

During  one of these attempts, trying to cross to Turkey, my 10-year-old son was beaten by the Turkish guards.

They were beating him to wake him up and accused me of sedating him. But he was exhausted from extreme fatigue.

They told us that Turkey is not for Syrians to “go back to your country.”

On our fourth attempt, we crossed the border to Turkey and went to Izmir to cross the sea to the Greek islands.

We tried more than once but failed, until the last attempt when we stayed for five hours at sea.

The sea was rough and the fear was immense. After we reached the island of Lesvos, we received our asylum rejection after a short time, and then, there was another rejection.

After that, we began requesting to have our case reopened. Then we signed the papers of the new case, which included a statement of approval to voluntarily return to Turkey, which, according to their statement of being denied Asylum, was a safe country for us.

This is not true, of course.

This statement was written exclusively in Greek and was not translated. The translator, who helped us sign the statement, was not allowed to translate its content.

Our return to Turkey will be death itself because we are threatened by these gangs in Syria.

They will find us wherever we are, and my husband who disobeyed their gruesome and inhumane demands, such as bobby-trapping cars to detonate them among innocent people, is viewed as someone who committed a treason for which we should be punished. .

We are still living in terror here.

We live in the forests, where snakes and scorpions enter our tent every day.

We hope that the fear, fatigue, and dreadful events we endured, will not be in vain.

I will not forget my son being beaten by a Turkish guardian, as he looks like an adult man, or my other son returning to the tent stabbed a few days ago, here in the Moria camp. I have also experienced an attempted assault by a drunk man when I went to the toilet that was far from our tent’s location.

I am nine-months pregnant.

He pushed me, and I didn’t dare to do anything so that I wouldn’t anger him. After all, I am a defenseless and weak woman.

My 10-year-old son has developmental delays and when I look at him, I remember him being subjected to physical abuse by the Turkish guard.

My feeling seeing my son in this stabbed me. I will not forgive myself for what my children have  endured from this journey.

I try not to let what happened affect my thoughts and positivity in life, for the sake of my children.

I always try to explain to them the brighter side of this journey; that one day they will sleep in a safe home, will go to schools for kids and will live in dignity.

I did not expect that I would live in this manner for so long.

I cannot imagine that I will be able to go on.

They crammed us in this camp and gave us a tent that does not fit two people.

I only try to live for my children’s future.

We built a bigger tent from nylon and wood.

When I look at my children when they are sleeping at night, I hope that the crack of dawn will be better.

And this is what inspires me to be patient and strong.

I try to be hopeful that tomorrow will be better than today.

My dream was a normal life before the war. I married in 2010, and the war started a year after.

I was hoping to live a happy life with my husband, watching my children come back from school.

It was my hope and dream before leaving Syria, my homeland, to have a normal life, far from fear and terror. We searched for that but have not found it yet.

My children are my strength, before and after I left my country.

I find joy in fulfilling their requests.

I used to cook for them whatever they liked and rejoiced when I mastered it.

Seeing them delighted with food and their joys are my motivation and happiness.

What I went through always strengthened me a lot.

Hardships proved to me that I must live and fight to establish happier days for my children, in order for them to forget what they went through.

Their childhood memories must be beautiful.

What I went through was a lesson.

Therefore, my current dream is to have my four children on the safe road without any illnesses or damages that could harm their future.

I hope my voice will be heard.

I do not wish for any mother or child to live the life or experience what we have lived.